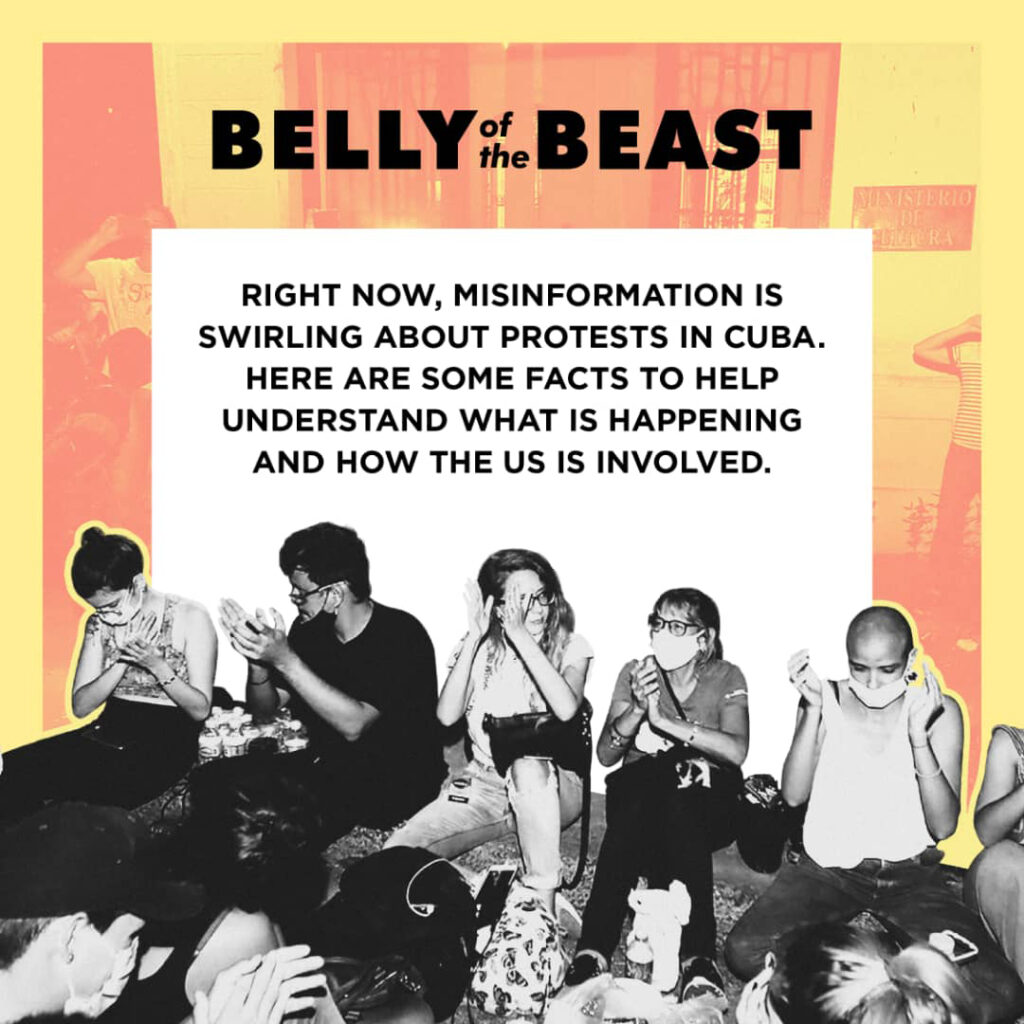 Since last week, partial views of some events that have occurred in the capital of Cuba carried out by some young people, artists by profession in some cases and others that are considered as such have been reported in the press and on social networks.

The facts refer to the arrest of a Cuban citizen, who committed an offence of contempt to the Police and therefore he disrespected the current criminal law. Said citizen was sentenced to 8 months of deprivation of liberty by trial, in accordance with the guarantees of due process for this kind of felony. What has been tried to qualify as an arbitrary detention for media propaganda.

No more than 15 people, who claim to be artists, who in turn have proven ties with the US Embassy in Havana, met in a private house in the San Isidro neighborhood, in the Cuban capital to sue the revocation of the sanction imposed on the aforementioned citizen and for this, some of these people alleged to start a hunger strike.

The meeting of these people in this house was complicated with the entrance of a citizen who arrived by air from abroad and went to the aforementioned house in the San Isidro neighborhood and did not observe the sanitary protocol to prevent the spread of COVID- 19, such rules which are in force in the country. In this way he recklessly exposed the possible spread of the virus to these people. In view of which, the law enforcement authorities, last Thursday, November 26, had to act and evict the group of people from this house to demand compliance with said Protocol, in accordance with current law.

On Friday, November 27, around 150 people, mostly young people from the artistic sector or related to this sector, went to the headquarters of the Ministry of Culture to demand the immediate attention of its Minister.

These people, composed by a very diverse group and with different motivations, some of them in support of the revocation of the sanction imposed on the aforementioned citizen for offence of contempt to the Police. Others, with other demands related to the exercise of their artistic activity in the country and their freedom of expression, others in support to the participants in the alleged hunger strike.

Representatives of these people, who went to the Ministry of Culture, were received at its headquarters that same night by the Vice Minister of Culture, Fernando Rojas, who was available to listen to their demands.

These events have been presented as an extraordinary and far-reaching situation in Cuba based on the manipulation carried out by activists on social networks and which some media have irresponsibly echoed. These activists in Cuba and abroad kept on intentionally sending direct messages to different sources in which they referred to alleged acts of violence against people who went to the Ministry of Culture of Cuba and other slanders. Their messages advocated civil disobedience and incited hatred and made threats of all kinds against people with different opinions or who objectively expressed the facts, with the purpose of creating a distorted and extremist pattern about the reality in the country to generate an international opinion on the existence of an environment of instability in Cuba.

In this campaign, attempts have even been made to use and manipulate young people, in particular, from the artistic and cultural sector, based on alleged overwhelming support for these events. Some of the young people who participated in the meeting at the Ministry of Culture have come out to deny the manipulation of their opinions and have ratified their support for our system and institutions.

It is obvious that an attempt has been made to fabricate a media campaign against Cuba and its government based on these events. Some media and institutions in an irresponsible and unethical way have based their opinions and headlines on this biased information, taken only from the media and from activists with extremist positions against Cuba and with the intention of destabilizing the internal order.

It is also significant and it was very suspicious that there has been coordinated and immediate action, between internal and external actors, referents of anti-Cuban actions in the past and that there has been massive synchronized financing of mobile data to certain individuals, who had telephones of high technology for the biased transmission of the facts through their opinions and slander.

In this regard, there is public evidence that nothing that happened was fortuitous, even in the personal accounts on social networks of some of the alleged leaders of this operation, it can be verified that they posted videos and expressed public thanks to Charge d’ Affaires a.i. from the U.S. Embassy in Cuba, which has been personally involved in promoting the alleged hunger strike that did not exist, in violation of the health quarantine rules established due to the Covid-19 pandemic and in the transportation and support to the participants of the provocation.

The Cuban media and the Cuban Foreign Ministry have presented evidence of actions promoted from the United States and with the participation of the Embassy of that country in Cuba, trying to provoke a situation of disorder, civil disobedience and instability on the island, which does not form part of the diplomatic functions of an Embassy and its personnel, in accordance with International Law. It is a flagrant and unacceptable interference in the internal affairs of Cuba, which the Cuban government does not tolerate the United States, or anyone else.

Old pretexts have been used against Cuba on the enjoyment of human rights, which criticize freedom of expression and assembly, without considering the manipulation and misrepresentation of these issues carried out by the powerful media and technological machinery, which is articulated from the United States, with the use and harassment on social networks with unmatched financial support.

The supposed instability situation in Cuba that is being artificially presented and created, would be a pretext to ask and encourage governments to express concern and consequently, the US tries to justify greater sanctions against Cuba, the economic, financial and commercial blockade and even a intervention, increased aggression and terrorism against the country, which responds to the script of the so-called unconventional war against Cuba and which has been applied in other countries.

The Cuban Foreign Minister recently denounced that the government of President Donald Trump is directly involved in financing and guiding so that civil disobedience and illegal acts against public order are committed in Cuba. Groups and individuals residing in the territory of that country, some with ties to terrorist activities, who openly promote acts of sabotage, violence and disrespect for the law, which maintain direct contact with some of the activists of the events mentioned in the San Isidro neighborhood in the capital.

President Diaz-Canel affirmed that “we do not admit interference, provocations or manipulations. The people have all the courage and morals to fight for the heart of Cuba.”

Despite this action from abroad and the campaign that is promoted against Cuba, the country is experiencing a situation of security and normalcy. The Cuban people will know how to safeguard their sovereignty, and they are sure that they will always count on defending the truth, with the support of friends in solidarity with Cuba. 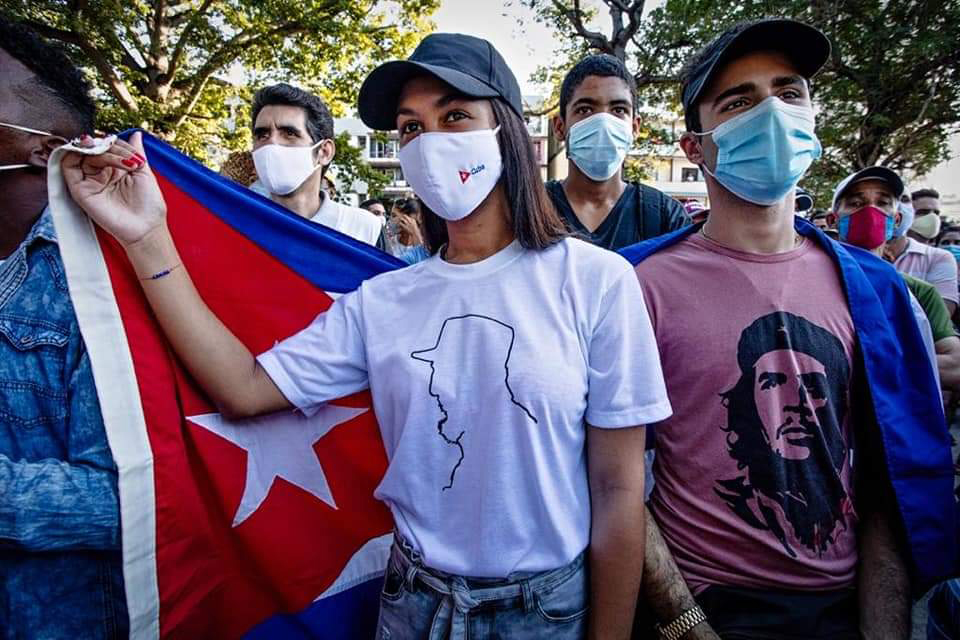