We are sending this link http://bienalhabanasi.cult.cu/bienal-habana/si-la-bienal-de-la-habana/
“Yes to the Havana Biennial”, to receive their always support for Cuba in one of the campaigns that are being launched against our country.
Now on a subject as noble as it is art and culture,  which join peoples and fills our souls with fullness.

We appreciate your adherence through the link sent above. Also you could check our Facebook.

Kingdom of the Netherlands 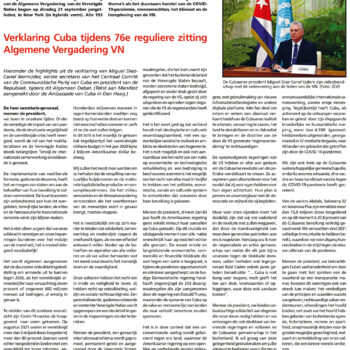 (Please call Mark first since he is more readily available)

END THE US EMBARGO OF CUBA. 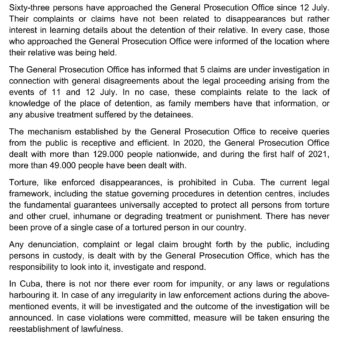 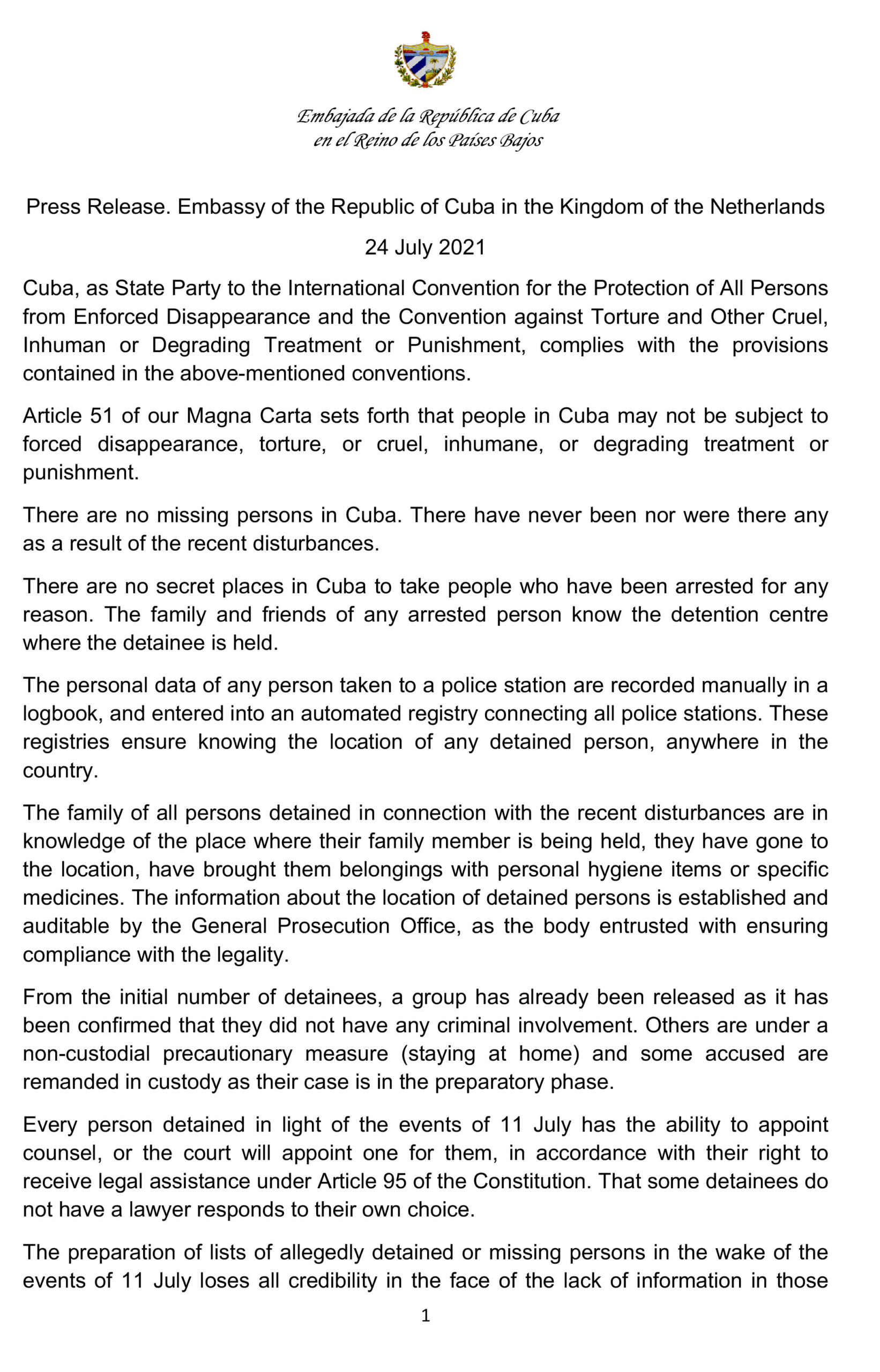 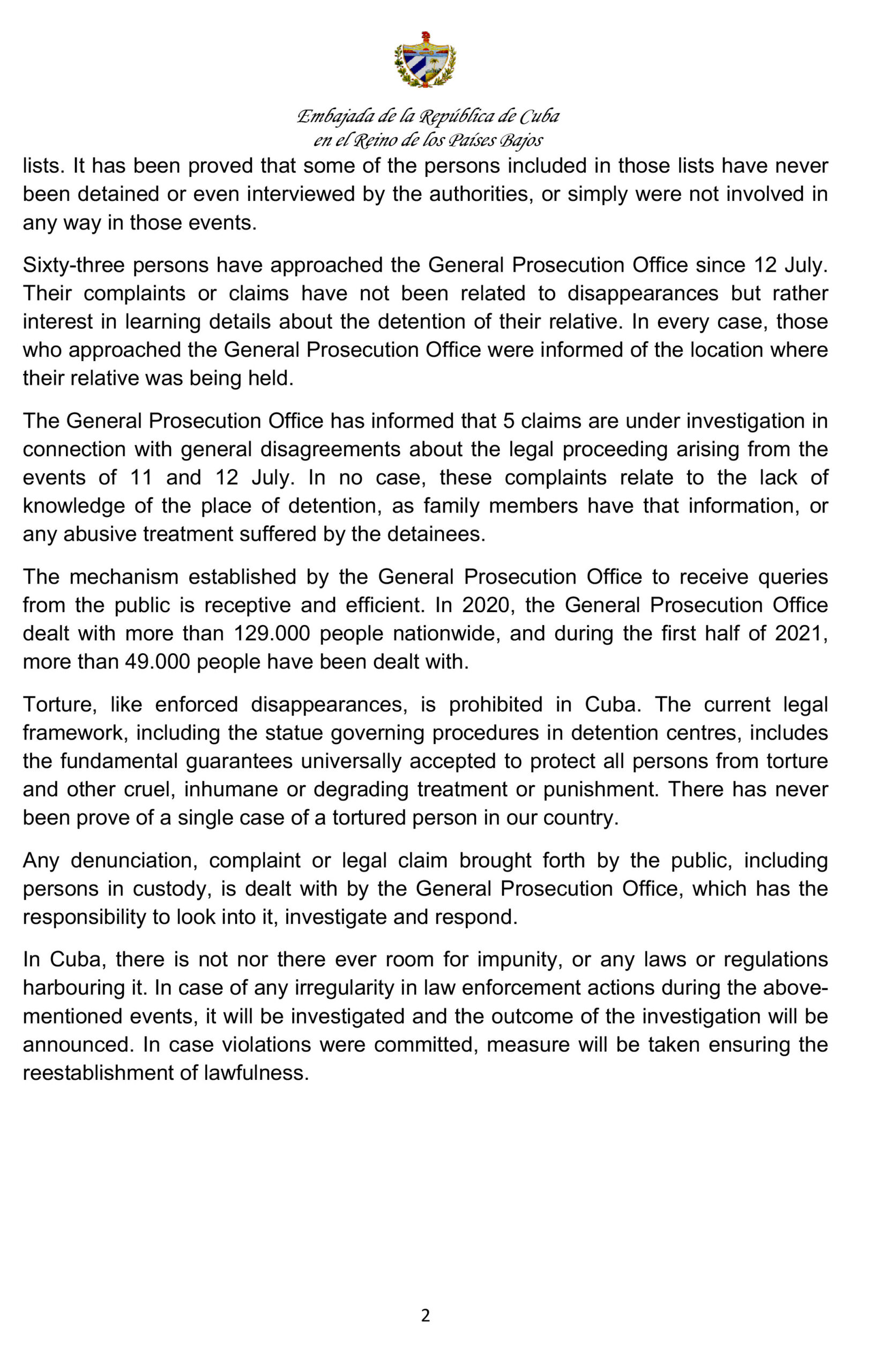 Declaration by the Internal Relations Commission

of the National Assembly of the People’s Power

We address ourselves to parliaments, parliamentary friendship groups and legislators, to respond to the immense, brutal political and media operation orchestrated and financed by Washington and propagated via social media, replicated automatically to generate hundreds of thousands of tweets and a similar number of followers, with the intensive use of robots, algorithms and accounts newly created for the occasion; all with the support of the international media and the information transnationals.

They have incited to violence, to crime, to disorder and to social indiscipline, while portraying to the world a totally, scandalously twisted view of our reality as part of the unconventional warfare orchestrated and financed by Washington against our country, aimed at changing the system freely and sovereignly chosen by our people, as endorsed by the Constitution approved on 10 April 2019, by 86.85% of those who voted, in a democratic election with a high turnout.

With utter shamelessness, they have disseminated worldwide, manipulated images of events in other countries to demonstrate, as instructed in their manuals, that Cuba lacks governability, that the nation is in chaos, while alleging internal repression which does  not exist.

In the throes of a pandemic of such gravity for mankind – which in Cuba, as the statistics show, receives permanent, proper attention – the US government, not satisfied with having escalated the criminal and genocidal blockade and financial persecution to perverse extremes and having applied 243 inhuman measures during the last four years in an attempt to stifle our people; now they are planning to prepare the ground for military aggression, with the familiar pretext of “humanitarian intervention”, in violation of our laws, of international law and of the UN Charter.

As is apparent from the images that have been disseminated, there have been disturbances, and various groups in certain localities have committed acts of vandalism, caused physical damage, made death threats and committed serious assaults, disrupting with flagrantly criminal acts the state of law and order that characterizes our country

The social uprising so vigorously promoted and craved by Washington has not happened.

As a result of over 60 years of blockade, we have accumulated problems that are aggravated by the pandemic, the huge expense it implies and the economic crisis it generates.

The Cuban people, united, determined and enterprising, must seek solutions and – as always in the past – build on and implement socioeconomic strategies, progress with creativity and rectify where necessary, while confronting with intelligence and daring the economic war waged against it, which constitutes the primary obstacle to development and the full exercise of human rights.

Do not be deceived: the Cuban people will advance with its party and government headed by President Miguel Díaz-Canel Bermúdez, with the National Assembly of the People’s Power and its Council of State which represents them, and with their civil institutions and organizations.

Our people are imbued with the values of unity, peace, concord, respect, solidarity, love and patriotism, ready to defend their independence and sovereignty with boldness and courage, at any cost.

We appeal to the legislators worldwide to raise their voices and call for an end to the genocidal blockade and application of Title III of the Helms-Burton Act; for removal of Cuba from the spurious and illegal list of countries Sponsors of Terrorism; for an end to interventionist actions, to attempts to bring about a “soft coup”, to this massive campaign of lies to justify their crimes, which in the present case contributes to the propagation of the pandemic; for respect for the self-determination and sovereignty of the Cuban people; for Washington to heed the international community, which has repeatedly manifested at the UN, the millions worldwide and the people of Cuba, demanding the lifting of the economic, financial and commercial blockade against our country.

“Year 63 of the Revolution”

International Relations Commission of the

National Assembly of the People’s Power 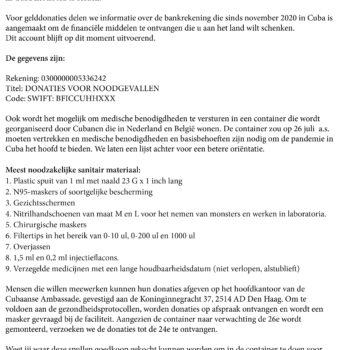 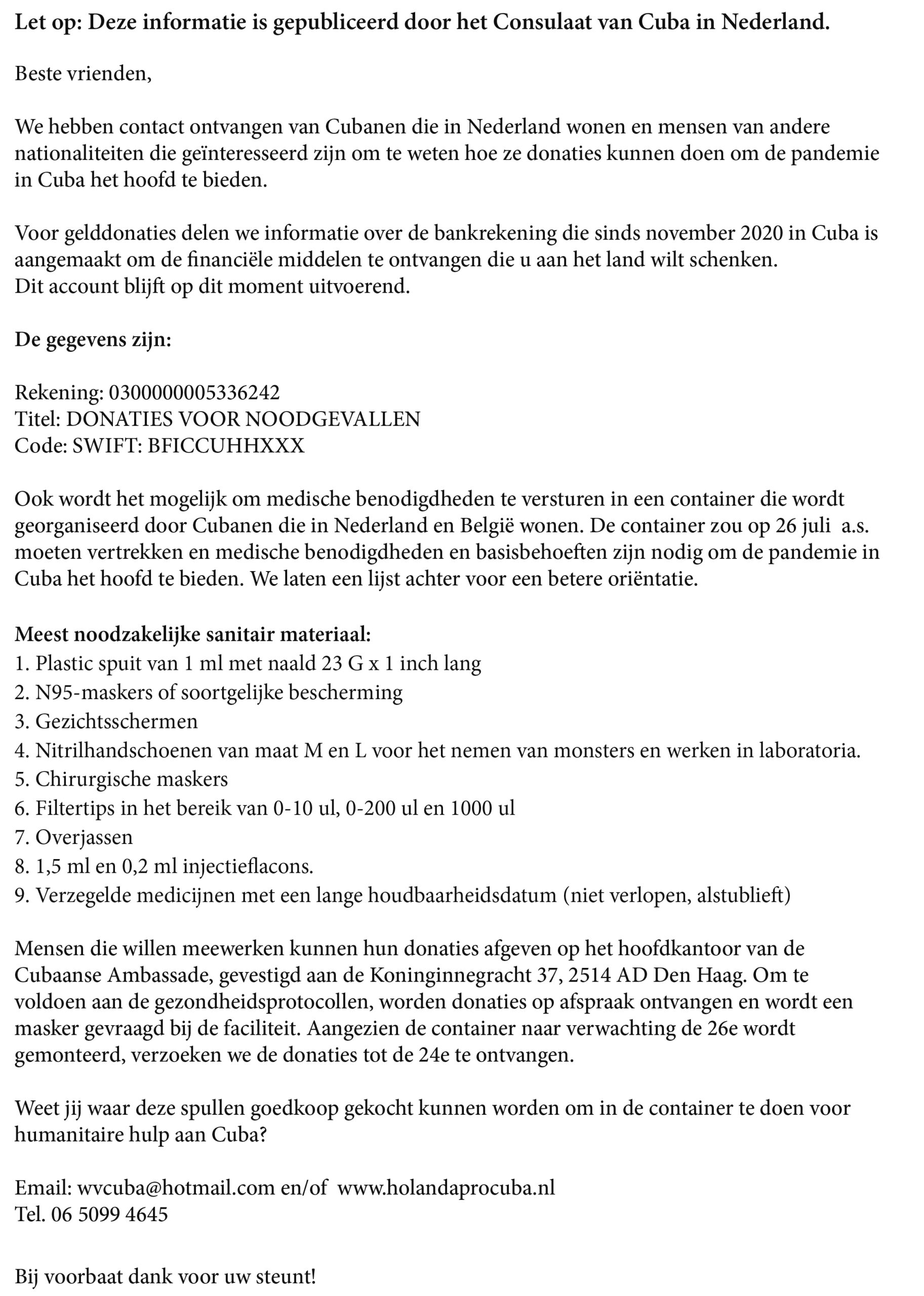 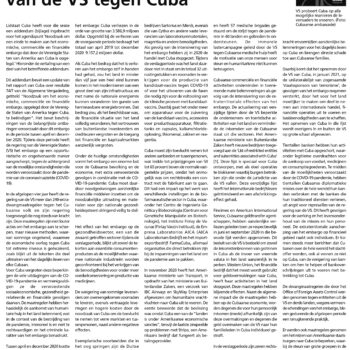 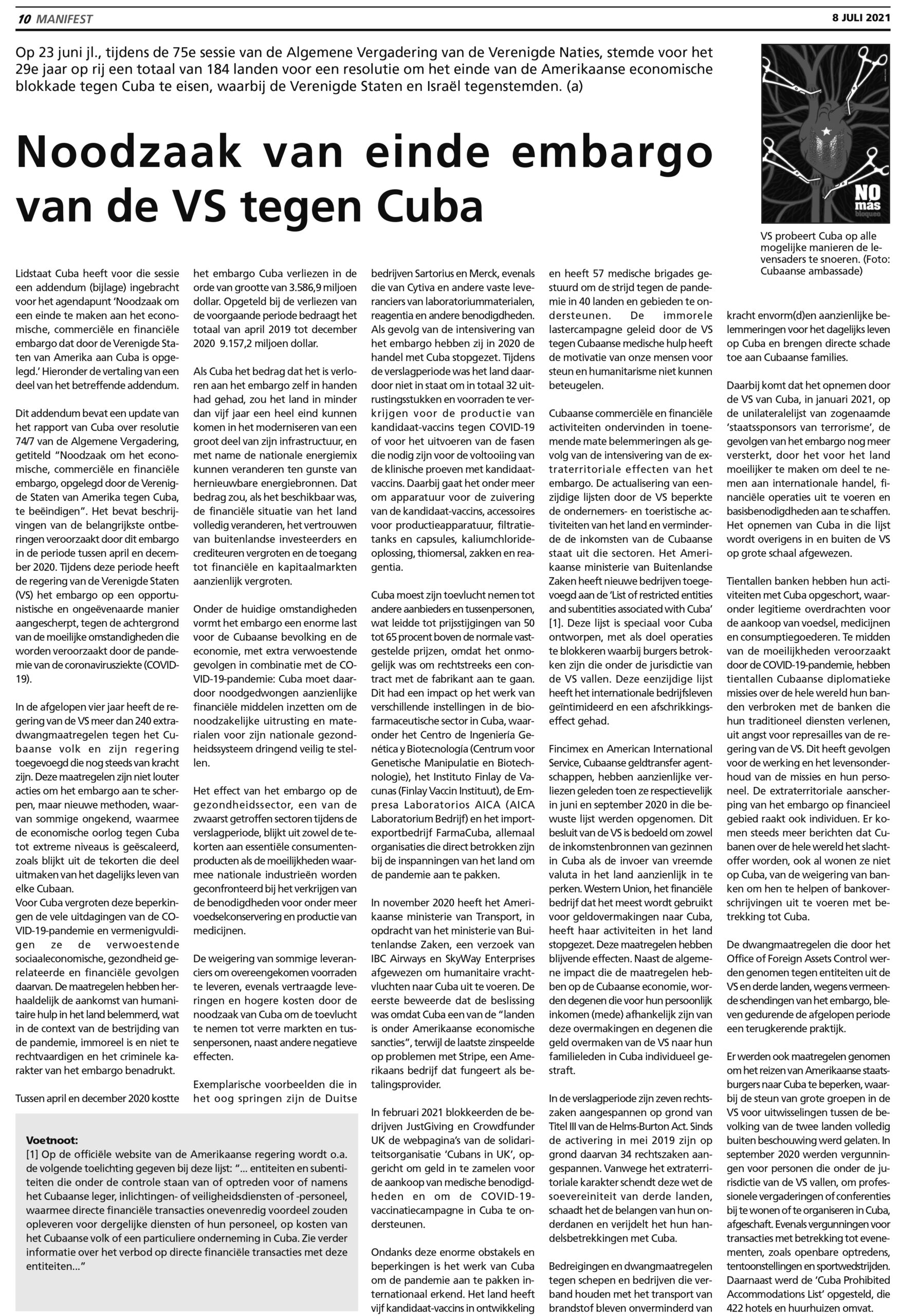